In my personal opinion, we have yet to discover the depths to which God has sovereignly chosen to wait for — and rely upon — the deep-hearted, earnest, persevering prayers of His people before His answers are dispatched from Heaven to Earth.

Elijah was an outstanding prophet of God in Israel’s history. He was a man through whom God poured great measures of His divine power to accomplish great signs and wonders to confirm and affirm God’s messages spoken through him to Israel.

“The prayer of a righteous person is powerful and effective.

Elijah was a human being, even as we are. He prayed earnestly that it would not rain, and it did not rain on the land for three and a half years.

Again he prayed, and the heavens gave rain, and the earth produced its crops.”

Let’s be people who devote ourselves to developing our prayer life, and to discovering the depths to which God intends that we earnestly pray.

See you at the altar of prayer, the place where God pours out His power and effectiveness from Heaven and into our situations.

Sometimes God does not want us to do anything, except pray and then watch. This was one of those times for Israel.

“‘Our God… we have no power to face this vast army that is attacking us. We do not know what to do, but our eyes are on You.’

… This is what the Lord says to you: ‘Do not be afraid or discouraged because of this vast army. For the battle is not yours, but God’s…. You will not have to fight this battle.

Take up your positions; stand firm and see the deliverance the Lord will give you… Do not be afraid; do not be discouraged. Go out to face them tomorrow, and the Lord will be with you.’

… and all the people of Judah and Jerusalem fell down in worship before the Lord. Then some Levites… stood up and praised the Lord, the God of Israel, with a very loud voice.”

See you at the altar of prayer where God gives to us His instructions… where SOMETIMES He issues the decree: “Just stand still and WATCH what I am going to do!”

Do you have a raging, dark storm quickly approaching you?

Do not be afraid.

God doesn’t only reveal Himself to us in wonderful worship services where even the impossible seems like child’s play for God to accomplish.

Most of the time it is in the midst of extreme danger and darkness that God reveals Himself to us. In these times He intends to test us, to show us what is in our hearts. He already knows what is in us, but He wants us to see for ourselves what is in us.

“When the people saw the thunder and lightning and heard the trumpet and saw the mountain in smoke, they trembled with fear…

Moses said to the people, ‘Do not be afraid. God has come to test you, so that the fear of God will be with you to keep you from sinning.’

The people remained at a distance, while Moses approached the thick darkness where God was.”

See you at the altar of prayer, located in the center of that coming storm. Get ready to have a lot of revelation, of self and of God.

Do not be afraid. 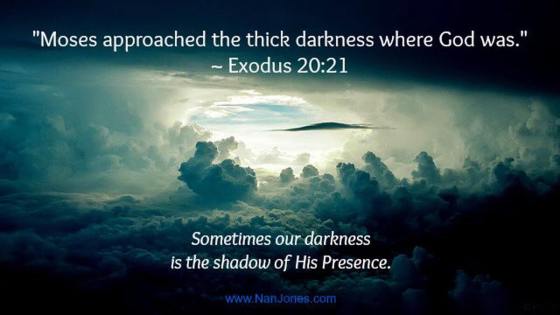 It has been said by some that if you pray for something more than once, it shows your lack of faith. This has been promoted and embraced by many in the hyper-faith movement. This concept is completely unscriptural, and robs sincere believers of a tremendous effectiveness in life and ministry that God has otherwise provided to ultimately bring glory to Himself.

If you have believed the above mentioned error, this article will help you to launch the rebuilding of your faith and your practice of persistent prayer.

END_OF_DOCUMENT_TOKEN_TO_BE_REPLACED

Jesus understands how difficult it is to build a consistent prayer life, beyond those emergency life-or-death situations that provide us with plenty of motivation to pray. He identifies with us in our struggles because He has been there and experienced many of them, though He Himself was without sin. The struggle though was real!

END_OF_DOCUMENT_TOKEN_TO_BE_REPLACED

“In our lifelong relationship with God we will experience the opposing traits of God like mercy vs judgement, peace vs anger, and grace vs finality.

In one season, we may experience our faith-filled prayers being answered and fulfilled (as-in Hebrews 11).

In the next season, we may experience our faith-filled prayers remaining UNanswered and UNfulfilled (also as-in Hebrews 11).

In both seasons, our lessons are not about ethereal and mystical doctrines and theologies. Instead we are learning to walk with God and to be faithful to Him, even as He fulfills His own will and not our own.”

To My Fellow Church Leaders,

At times, I wonder how often we miss the opportunity to follow David’s example when disaster strikes our own camp, leaving God “holding the bag” because we are too exhausted, grief stricken, and facing too great an opposition to do what God has been teaching us to do as leaders.

In 1 Samuel 30, David and his men’s families were kidnapped, their belongings stolen, and their homes burned to the ground. After weeping until they were exhausted, David’s fellow warriors blamed him and they talked about stoning him.

But… David, though himself completely exhausted from grieving, then did something as a leader that transformed the enemy’s disaster into a Miracle from God!

He “found strength in the Lord” and he “inquired of the Lord”!

Instead of assuming that the tragedy must have happened as a result of God’s providential will and leaving it there, he refused to assume anything except one thing: Inquire of God!

It isn’t over until God says that it’s over. Pastors and Leaders, regardless of our level of exhaustion and the anger of the mob that might be threatening the very life of our ministry, we are not done until we have inquired of the Lord AND have heard back from Him.

See you at the altar of inquiry, my friends.

Featured Quote of the Day

“What other nation is so great as to have their gods near them the way the Lord our God is near us whenever we pray to Him?”